30th June 2017
Good afternoon, Rumblefans! We’re taking a little departure from our Superstar week to have a little look at one of the main releases on pre-order at the moment, the Event Cards!

This deck of cards offers fun and crazy ways to mess up your games of RUMBLESLAM. They’re weird and wonderful, and sure to put a thorn in the side of even the best laid plans.

In your games of RUMBLESLAM you can choose to buy a card in the same way you’d buy a wrestler or a re-roll. For the low price of 50K, you can to pick one randomly selected Event Card. You can pay for a total of five! At the start of any round you can choose to turn over an Event Card and follow the instructions. Some will be good, some will be bad, and some will change the way the game plays. Some are subtle, and some are rather over the top.

I managed to steal a pack of them and thought we’d have a look at just a few.

The top two cards in our little picture are examples of events that change how the game plays.

Bloodletting means that Bleeding counters now stack, and your wrestlers take damage equal to the amount of them that they have on their character card! Suddenly Great Jaw or The Cold Bloods become extremely powerful! A Saurian Brawler already does Bleeding with its Brawl attacks, but imagine piling on four Bleeding counters in one activation! Ouch.

The Rubber Turnbuckle card does exactly what you’d expect! All Turnbuckle ranges are doubled until the end of the game. That means the WEIGHT 3 wrestlers with relatively short ranges become a lot more deadly, and WEIGHT 1 wrestlers with high ranges can literally leap across the ring in a single bound! Turnbuckle Abilities usually trade in manoeuvrability for heavy damage, but now you can have both!

Those two cards affect both players, and there are quite a lot of cards in the deck that work in such a way. But what about the other cards?

Our next card is Tweaked To Gomorrah And Back, which only affects a single wrestler. You get to pick a friendly one, dose them up on whatever is available in Gomorrah at the time, and end up bouncing off the walls (and ropes!) with an upgraded Dexterity of a whopping 2G+1!

Or if you were after a card that doesn’t boost your own team but absolutely cripples your opponent’s, look no further than Petrified. This is the exact reason why the RUMBLESLAM officials make any Gorgons wear a blindfold – it’s just not fair! Your opponent picks one of their own wrestlers, and they’re immediately petrified! They loose all their Stamina, become extremely heavy, and can’t be activated for the rest of the game! If you draw that card later on in the game, that means that your opponent may not have many wrestlers left to choose from, and could be the exact break you need to come through to a victory!

There are plenty of cards that benefit the player drawing them, but watch out because there are also some mysterious cards floating in the deck that actually negatively affect the player drawing them! I won’t spoil those for you here, purely because I don’t want to rid your opponent of the look on your face when you draw one at a crucial point in the match. Those negative cards are few and far between of course, but they can come up every now and then!

Some Rumblefans may already have their hands on the Event Deck. We sent them out as freebies for Kickstarter backers, and we’ve also been selling them at events we’ve attended for the last few months. If you’ve got them already, what’s your favourite? 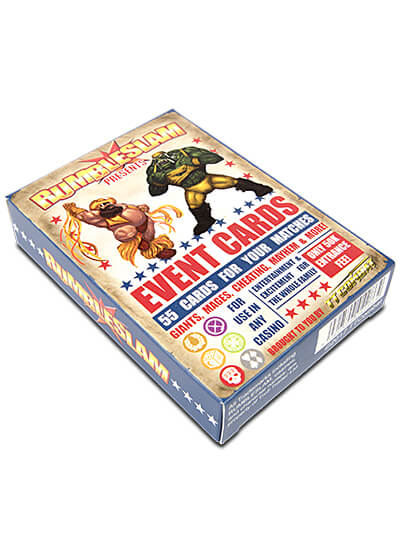 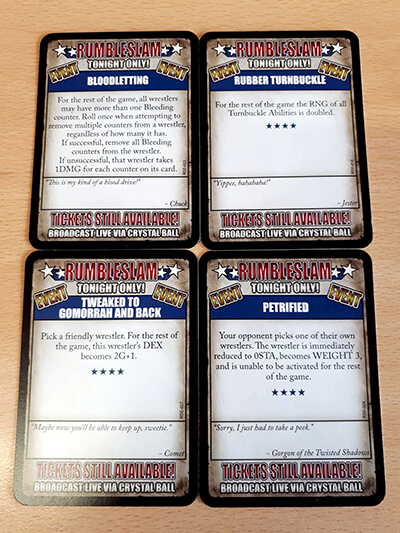