It’s been an exciting few days! We’ve had brand new wrestlers unveiled, more superstars for pre-order, and some of us spent the weekend playing with the new Event Cards! Some ridiculous fun was had.

But now we’re back in another Superstar Week! We took a little detour the last few weeks to talk about Tag Teams, so these next couple of weeks we’re back to normal, talking about our new wrestlers.

And for a treat on this long Monday, I thought we’d start with a brand new wrestler, and one of my favourites. It’s time to welcome Lumberjacked to the ring!

His miniature is exactly what you’d expect from a lumberjack wrestler really! He takes no rubbish from anyone, appearing in his traditional garb, donning a wooden mask he crafted himself.

Looking at his stats you’d be right in thinking he’s a solid addition to a team. With not a Copper dice in sight, Lumberjacked excels in grappling, and has a decent Defence and Dexterity to boot. With a good amount of Stamina, AP, and MP, he seems a pretty good choice. But then you look at his cost. 275K? Really? That’s very cheap. Especially for 2 Gold Grapple!

Now let’s look at those abilities. I’ve used Lumberjacked a lot over the last few weeks, and I’ll tell you now that the main problem you’ll have with him is not having enough AP. All his special abilities cost 3AP, and they’re all really useful. The upside is that he’s Popularity 1, so you can always go for a Crowd Pleaser with that remaining 1AP.

Sleeper Hold All Night is a great Grapple Ability that will see use most rounds of a game. It only does 2 Damage for 3AP, but has the Dazed AND Knockdown Abilities, both of which can be ridiculously exploited by the rest of your team.

Caber Toss is really just an excellent way to get across the ring. Again on 2 Damage, but a free Crowd Pleaser attempt and Shove 2 means that unless you’re planning a lot more from the round, this is a great choice when slamming into an opponent.

So what does his Crowd Pleaser do? Well, now we get into the meat of what makes Lumberjacked a great choice. It gives him +2ATT and +2GRP when attacking WEIGHT 3 wrestlers until the end of his next activation. So not only does he have a great 2G GRP, he gets a fantastic +2 against the big guys (and gals)!

Finally, Lumberjacked has the (very fitting) Deforestation Passive Ability, which gives him the Fury special rule when Brawling anyone from The Forest Soul. It’s a bit situational, but that extra AP we talked about before can multiply into two Brawl attacks against the right foe. And with all the Relentless Dosh tag teams that will undoubtedly be going round, that’s definitely a good thing!

Lumberjacked can handle himself in most situations, but he’s best used either in conjunction with the rest of your team, or as a one-man lift and throw machine! He works very well with teams that can get in and deal a lot of damage to downed foes. That means The Heavy Pounders with their reliable +1s to attack are a great choice, as are The Furry Fury, who really like picking on people when they’re down!

However, Lumberjacked has decent but not stunning Defence, meaning anyone with a strong Attack stat will be able to deal damage to him fairly easily. If you’ve got WEIGHT 1 or WEIGHT 2 wrestlers with his attacking special abilities, those are the best to take him out. Be wary of sending in WEIGHT 3 wrestlers, as Lumberjacked has a good chance of just chucking them out the ring!

Phew. Yep, he’s pretty great really. Unless you’re some kind of tree or fairy person. But who needs them when you have suspenders? 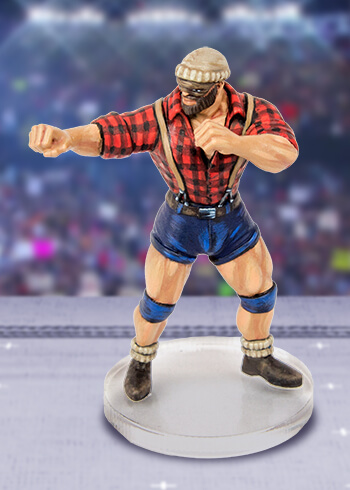 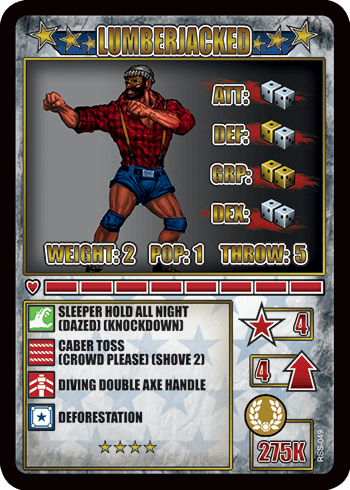 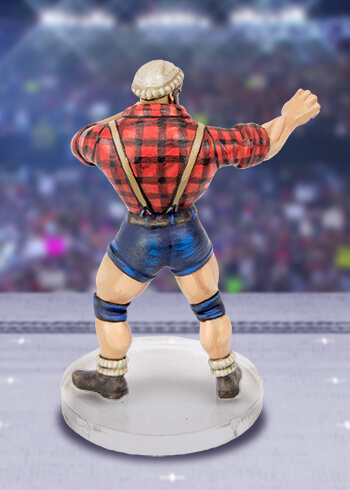