22nd August 2017
Now we’ve met the golden giant himself, let’s look at what he does in the ring!

First, that miniature really is a giant! I think he’s tied with Mythos as the tallest of our Superstars.

Second, that stat card has a LOT of gold dice. Nothing fits the Golden God more than having an all gold statline!

That said, there aren’t MANY dice on those stats. A Gold+1 is still a frightening prospect, but Dicephaurux isn’t going to be getting any instant KO Beatdowns any time soon. What he loses in out and out power though he more than makes up for in reliability. And with 2 Gold on his DEX, this is one of the quickest WEIGHT 3 wrestlers in the game!

Let’s talk about that WEIGHT 3 stat for a minute though. He only has 7 Stamina and THROW 3, but has 4AP and 4MP. This is a wrestler who is hard to lift and takes up a lot of space in the ring, but should very much be treated like a smaller wrestler than he is! He’s tall, but lithe. Also, he’s a WEIGHT 3 superstar for a measly 275K. Nice.

Now let’s talk about those all important skills.

Golden Shining Spear costs a hefty 3AP but does 3 Damage. It trades the extra Copper die of a Rope Attack for the Rocket special rule, meaning Dicey can appear anywhere in the ring without much trouble!

Double Drop is a Turnbuckle Ability that trades one of his Gold dice for the Shove 3 special rule, potentially smashing your opponent against the turnbuckle or bouncing them from the ropes for another blow.

These attacks seem a little lacklustre, don’t they? Well that’s where Dicephaurux’s other abilities come into play! His Crowd Pleaser ups his next attack to 3 Gold dice (that’s any attack that uses the ATT stat, including his special abilities), which is crazy good. Make sure to power him up first, then unleash the hurt!

Two heads is a Choice Ability which gives you the choice of the Bleeding and Dazed special rules, or the Fury special rule. That’s on ALL attacks. So you could do your Double Drop, pass your Crowd Pleaser, and use Fury to batter your opponent with 3 Gold dice! That’s a nice skill to have.

Finally, Better Than One is a Passive Ability that ignores the first attack that would KO Dicey, thus offsetting his relatively fragile stature!

So how best to use this giant of a man (and a half)? Well, he takes a little time to get powerful, but with some decent rolls (and maybe the help of an Entertainer) this colossus can be a real powerhouse. Of course, he’s a great support character, and definitely isn’t a beatstick. Don’t put him right in the middle of the carnage, keep him back until you get the opportune moment to unleash him. His special abilities both cost 3AP, which means you have flexibility on your side, not having to set up plays very early, unlike a lot of other WEIGHT 3 wrestlers. And use the right choice of Two Heads! It can make all the difference.

How to fight him? Punch him out! With 2 Gold DEX you’re not going to throw him out, so KO him first! His DEF is reliable, but some decent special abilities throwing multiple dice will have a great chance at getting through that Gold +1, and his Stamina is low enough that a KO shouldn’t take too long!

Dicephaurux is a great reliable wrestler, so pairs well with an unreliable team like The Raging Beasts or The Green Bruisers. Or any team that fights against The Greek really! 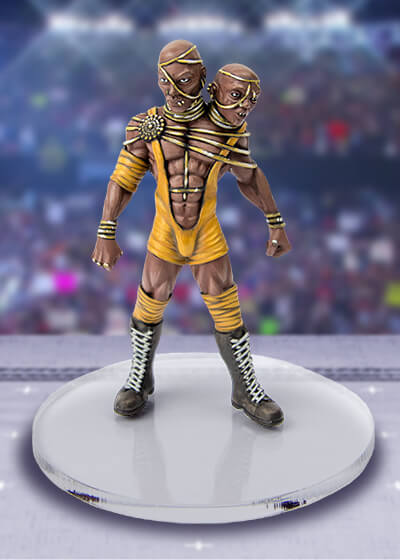 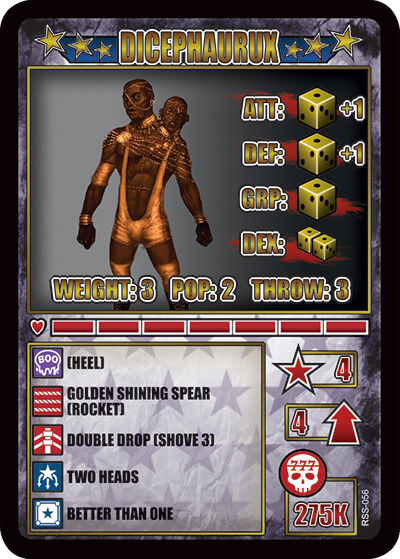 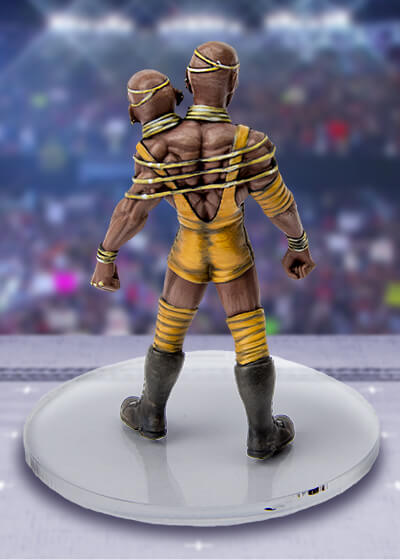