12th July 2017
We’re back, Slammers! It’s time to enter Rolling Bones and go face to face with a being more ancient than any we’ve met in RUMBLESLAM so far.

Fang is a vampire from a past world, reawakened and revelling in the mayhem of the RUMBLESLAM ring.

With no Copper dice in sight and a nice high 5 MP, this is a wrestler that excels wherever you need him. His stats are all almost equal, although Defence and Grapple edge out slightly ahead of the curve. So what do those special abilities do?

Superhuman Spinebreaker is the same Grapple Ability we saw the other day with Mythos. If Fang gets a Beatdown, he also gets a free Crowd Pleaser attempt, which is just swell.

Dayrunner trades in the extra Copper die of a regular Rope Attack for a more reliable +1 and the Rocket special rule, further showing Fang’s ability to be exactly where he needs to be.

Silver Stake is a rare Turnbuckle Ability. It has the Shove 2 special rule (not rare in itself), and does 4 Silver on its Attack (pretty great), but only costs 2AP! That means you can climb the turnbuckle, do the attack, and still have 1AP to spare at the end of the round!

Fang’s real flavour comes with his Vampirisim Passive Ability. Whenever he performs a Grapple Ability successfully, he also replenishes 2 Stamina! That means the Superhuman Spinebreaker is going to get a lot of play!

Fang’s Crowd Pleaser is the take home though. He should hopefully be attempting it a lot through all those Superhuman Spinebreaker Beatdowns he’ll be getting. It gives all friendly Rolling Bones wrestlers the Vampirism Passive Ability until the end of the round. That’s really big! Take the Initiative with Fang, and then go around Grappling your hearts out to replenish your team back to perfection!

Fang is one of those balanced wrestlers who can excel in any situation, especially when picking on those a little worse than him. He’s not a Superstar killer, but he is tough enough to deal with most regular wrestlers, sapping their lifeforce as he does! A great counter-attack wrestler, it’s nice to spend the first round or two on the defensive before Dayrunner-ing across the ring and sucking the blood from your opponents in order to boost your team to full stamina again!

Those +1s on Defence and Grapple make Fang a tough opponent to hurt in the first place, but if you’re facing him you’ll eventually get through to damage him. He doesn’t have a colossal amount of Stamina, you just need to make sure you can deal with him in one go, otherwise he’ll be replenishing Stamina all over the place, making your previous attacks a bit pointless. Surround him with wrestlers and launch a flurry of special abilities on him. To get the most out of Fang, he’ll be used first in each round, meaning you’ve got the whole round to KO him and throw him out before he gets a chance to regain his Stamina.

So what teams does he do best with? Well, that’s pretty obvious. He fits perfectly with The Cryptborn Nightmares, who are all about regaining Stamina to keep them in the game. They also have a lot of Grapple Abilities, meaning the Vampirisim Passive Ability will not go to waste. Fang’s Crowd Pleaser only affects friendly Rolling Bones wrestlers, which means he also works well with The Green Bruisers. Blood-drinking Orcs, who ever thought of such a thing? Your Orc Grappler has a great Headlock Ability, but it’s even better if it heals him too! Other than that, you can pair him with Grave Digger or Gun, making them extremely hard to KO. Marowhackjob is also a great Superstar to go with Fang, as he’s going to take a lot of punishment – it only seems fair that he can heal himself back after taking one for the team! 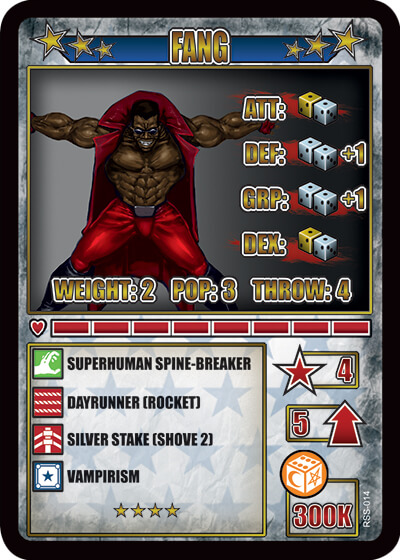 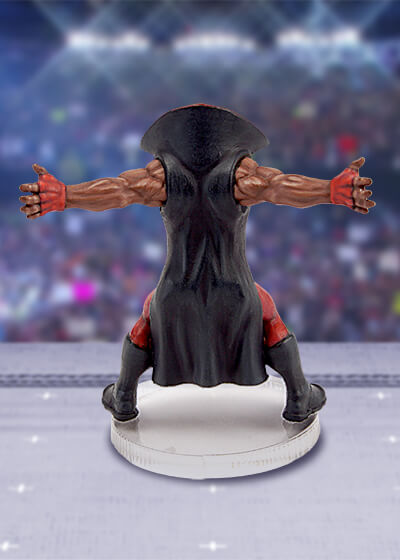