14th July 2017
We’re back, Rumblefans! Today is the last day of our new release Superstar week. I know, it’s been an absolute rollercoaster, but all good things have to come to an end. Of course, there’ll be more coming soon, so don’t you worry!

Today we’re looking at another fan-favourite who has seen his appearance change since the Kickstarter campaign. As with Ice a couple of weeks ago, Granite used to just be a tiny man, and is now a walking mountain he always dreamed of being!

With almost matching stats to Ice, Granite is everything you’d expect. He’s tough, he’s strong, and he’s got Stamina in spades! Him and Ice have the highest Stamina in Rumbleslam, and also tie with a few others for the highest Defence! Granite is a little better at Grappling than Ice, but isn’t quite as Dexterous.

Granite Bottom is his Grapple Skill, and is just a great damage dealer. It does 3 Damage as standard, and with 3 Silver, has a great Beatdown chance.

Rockman Slam does extra Damage if your target is Knocked Down, and also gives Granite a free Crowd Pleaser attempt.

Granite also has the Stoneskin Passive Ability that Runic Thunder players may already be familiar with. Basically, if you fail a Brawl against Granite it does damage to you instead! You are punching a mountain after all!

Finally, let’s talk about the Face Heel Turn Passive Ability. Granite really plays to the crowd, being a good guy and a bad guy in equal measure, depending on how the match is progressing. Picking Face means Granite’s ATT stat changes to a much more reliable 2G+1, and picking Heel means he gains that special rule and his GRP stat changes to 1G 1S+1. And Granite’s Crowd Pleaser allows him to pick both options!

Granite doesn’t provide as much utility as Ice for the rest of your team, but is definitely a one-man army in his own right. With high Attack, Defence, and Grapple, there aren’t many wrestlers that can go toe to toe with him, especially considering Granite only costs 300K – the same as most other WEIGHT 2 superstars, and a lot of WEIGHT 3 wrestlers!

As a Free Agent, Granite fits in well with any team that needs an extra beatstick. He doesn’t need much support and doesn’t offer much in the way of synergies to other wrestlers. That may seem like a disadvantage, but it actually means that he’s free to hunt down whoever he sets his sights on without any distractions. Where Ice isn’t quite worth his Dosh cost unless defending weaker wrestlers, Granite is free to just wade in and do what he does best without worrying about what anyone else is up to.

If you’re wrestling against Granite, there are three main ways to deal with him. The first is by running away. He only has 3MP and 3AP, so if you’re smart, you can outmanoeuvre him. The second is by using wrestlers with Knockdown, particularly on Grapple Abilities. His Grapple is high, but unless he’s a HEEL for that round it’s unreliable, and you can get through it with a decent roll, leaving him at DEF 0 until he gets up again. The third way is actually with Living Ammunition. Find a WEIGHT 2 wrestler and hurl them at him over and over again! Granite’s weakest stat is his Dexterity, so avoiding incoming wrestlers isn’t his strong suit!

Ice and Granite make a great team together, and if you end up being on the receiving end of the two of them, I wish you every bit of luck! 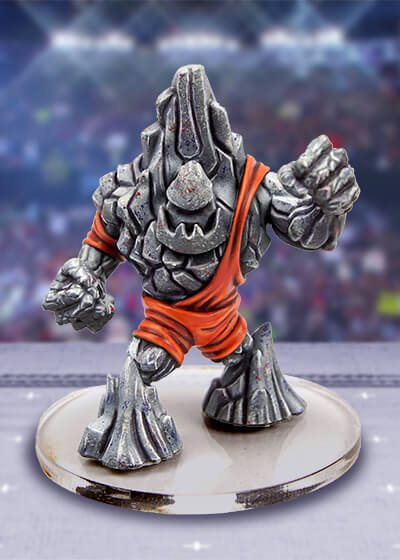 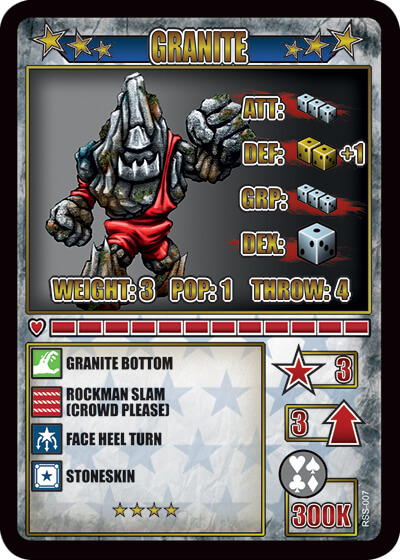 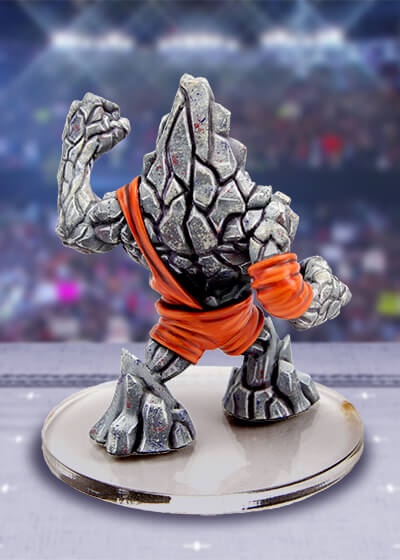