Ice has changed in appearance a little bit since his Kickstarter debut. He’s metamorphosed from a tiny ice man into a massive ice golem! This is better.

His stats are a little all over the place, so let’s look at them in detail.

Attack is 3 Silver, which is pretty strong. Get some Rope Attacks going for 3S 1C and you’ve got a lot of Beatdown potential there.
Defence is an astonishing 2 Gold +1, which is tied for the highest in the game.
Grapple is an average 2 Silver. He’s not going to be lifitng up many people.
And Dexterity is a not very good 1 Silver, but at least it has a +1 to it, so there’s a little bit more reliability there.
3 AP and 3 MP are standard of a WEIGHT 3 wrestler, so not much to talk about there. He’s slow.
Stamina is the real talking point. 12 Stamina! Tied with one other wrestler for the highest in the game. Combined with the ridiculous Defence, Ice is going to be able to just keep taking the hurt.

He only has two special attacks, but has two Passive Abilities too. He has no Turnbuckle Ability, which can be a bit of a let down for a WEIGHT 3 wrestler.

Cold Snap is a Grapple Ability which takes all 3 of his AP, and uses his fairly mediocre GRP stat. It only does 2 Damage too. But with -2AP, -2MP AND Knockdown, that’s a game changer right there. Hit any other WEIGHT 3 wrestler and just laugh for a while. If you can get it off (and remember, even Gold dice have blank faces) on a dangerous foe, it’s absolutely huge. Honestly one of the best special abilities in the game, only let down by Ice’s GRP stat.

And then there’s Avalanche. 2AP for 2 Damage is okay. But during attack movement, any enemy wrestler in base contact gets Knocked Down. No roll or anything, they just fall over. Considering Ice is on a large base, if you line this one up properly, it can again be a complete game changer.

Ice’s Crowd Pleaser is worth a quick mention, as for 1AP he gives each enemy wrestler a -1MP counter. Ouuuuch.

Finally, let’s talk Passive Abilities. Those special attacks are really great, but both are very situational. Ice’s real draw is in the Passives.

Glacial Skin forces opponents to change one Gold or Silver die to a Copper die when rolling a GRP roll against Ice. So remember before when I said that Cold Snap’s only real negative is Ice’s average GRP stat? That all changes now! This Passive makes him hard to pick up and hard to resist. It pushes him up from the “pretty good” category to “really good”.

I was saving the best until last though. The Wall is a Passive Ability that gives all friendly wrestlers in base contact with Ice his Defence value instead of their own. Did I say “really good” category? I meant “must take” category! Ice single-handedly (if those really count as hands) counteracts any naturally low defence teams. If there are any wrestlers who you think would be great but are a little too fragile, here’s your answer.

Which brings us onto who Ice is best with. Well, as a Free Agent you can include him in any team without forgoing your Sponsorship Bonus (of which Eagle Airways is a great choice, allowing Ice to be dropped into base contact with anyone that needs his help). He works perfectly with The Twisted Shadows, The Deadly Divas, The Green Bruisers, The Raging Beasts… anyone with low Defence! He also does very well with The Furry Fury, Avalanche and Cold Snap clearing the way for them to stomp on people when they’re down. Or hey, maybe The Runic Thunder as his Crowd Pleaser will slow other teams to their pace? The Cold Bloods would also be a good team, as their high movement and Skitter means they’d be able to attack and then get back into base contact with him.

Pretty much anyone would benefit from this walking glacier.

Alright, so how do you deal with Ice? It’s not easy! The best thing to do is to knock him down. That’s not easy, but once he’s on the floor, his Passive Abilities stop working, so you can either put the boot in, or attempt to pick him up and throw him out. How do you get him Knocked Down to start with? Well, that’s your choice! A decent Turnbuckle Ability or Grapple Ability will do it with some luck.
The other way to deal with Ice is to get him out of base contact with your opponent. Some Shove attacks will do that, or a well-timed Turnbuckle Ability with the Impact special rule are both extremely useful. One of his biggest strengths is defending his team, and if you separate them, he can’t do that! Equally, ways to lower his MP or AP are a must, as it really reduces how much use he’ll be to your opponent’s team. With only 3AP and 3MP, there’s not much you need to do to get him moving at the speed of a glacier!
He’s got a lot of Stamina, great stats, and amazing Passive Abilities, so it’s going to take a while to do a lot of damage. But once he’s down, the rest of the team are at a significant disadvantage.

So that’s Ice! There’s a reason I like him so much. 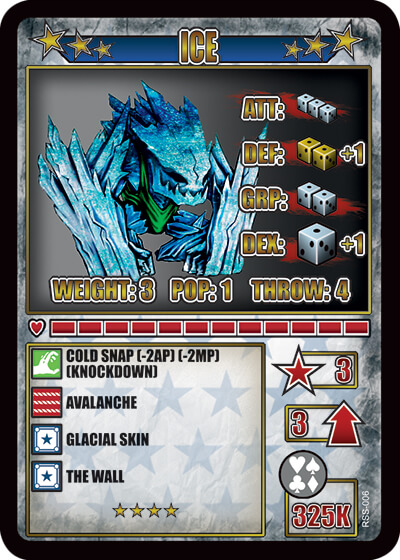 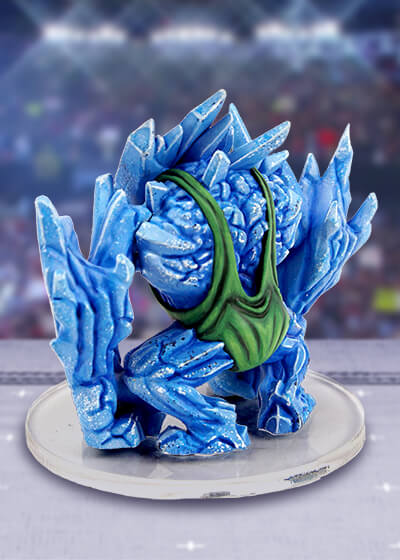