10th July 2017
It’s Monday again! Fast becoming my favourite day of the week, because I get to talk about brand new wrestlers!

Today we’re going to be looking at a huge, fiery demon. Mythos!

Mythos is massive. He’s big and muscly, and he’s got fire coming off of his head and hands. That’s a guy you don’t want to mess with.

In the ring he’s a formidable foe! He’s got a huge box of tricks, and a statline to match.

Firstly, he’s got an amazing Grapple stat. 2 Gold 1 Copper is one of the highest in the game, with a potential score of 11! The big thing on the front of his card though is that he’s a WEIGHT 3 wrestler with 4MP and 4AP. That doesn’t happen often, and allows him a lot of choices during his activation.

And what a lot of choices he has! Superhuman Spinebreaker is a Grapple Ability that gains the Crowd Pleaser special rule if it causes a Beatdown. With Mythos’ crazy good GRP stat, that’s a decent chance!
Clothesline From Hell causes Knockdown (already good) and has the Throw 1 special rule too. That’s not a huge distance to throw, and will only work to eject a wrestler if Mythos is in base contact with the ropes, but you can always use it to throw your target at someone else!
Finally, Unholy Diver takes all of his AP to do (meaning you can’t climb the Turnbuckle and do it in the same round), but does 3 Damage with 3 Silver 1 Copper ATT dice, which is a potential 12 for those Beatdowns. Standing on the Turnbuckle for a turn is annoying, but you can attempt his Crowd Pleaser whilst you’re up there, which gives Unholy Diver the Devastating special rule. And don’t forget that coming from The Feral Den, Mythos is a Heel, so that Crowd Pleaser can never go wrong.

Finally, Mythos’ Active Ability is Immolation Aura. That does exactly what it sounds like. Any wrestler in base contact takes 1 Damage. Friend and foe alike! It’s not a game winner, but used tactically can really give you the edge, especially if playing against a team with low Stamina.

Mythos is a great wrestler for grappling, and Clothesline From Hell gives him a really useful Rope Ability too. He’s a rare WEIGHT 3 wrestler that you can put in the middle of the ring and not be at a disadvantage due to low MP or AP. And if you don’t need any damage dealing (which he’s quite good at), you can always pick up and throw the enemy! Who’s going to stop you with 2G 1C GRP?

Well, brawlers might. If you’re fighting against this towering demon, the best advice is to start punching him. He has a fairly average Defence value, and that Damage quickly starts adding up. Get some decent special attacks going against him (Turnbuckle Abilities are good, and he’s big enough to almost always be suspect to Rope Abilities) and he will eventually fall.

Mythos is a perfect wrestler to join up with The Raging Beasts. He hits hard and doesn’t care much about defence, which fits well with their ethos! He’s also just a great choice of WEIGHT 3 wrestler for any team that needs a little extra grappling ability. Teams like The Heavy Pounders whose Ogre has more damaging ability than grappling ability will benefit from recruiting Mythos, as will The Runic Thunder, whose high Stamina can take a little accidental burning! 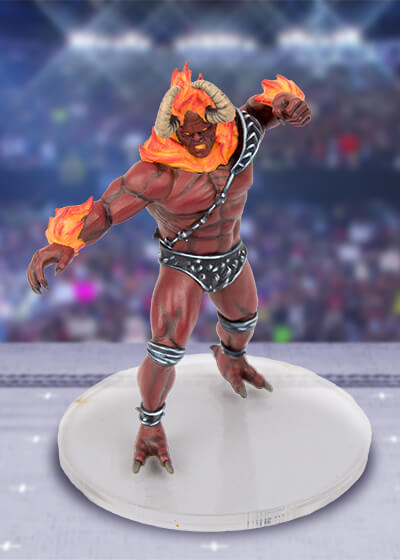 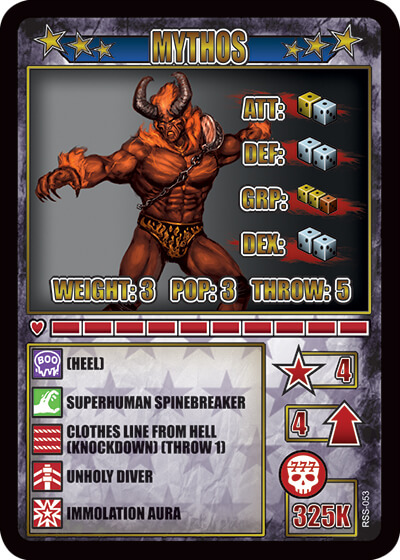