21st June 2017
It’s that time of day again, Rumblefans! It’s time to look at some superstars in Tag Team Fortnight!

First off, let’s mention the most important thing about these two satyrs. It’s not the guitar. It’s not Wonderkid throwing up the horns (although both those things are worth mentioning). It’s their Dosh cost. Both are 275K, which means that for a Traditional Tag Team you’re paying a tiny 400K, around 100K less than any other Tag Team.

So for that small amount of Dosh, what do you get? Well, a whole lot of Silver dice, and the odd Gold thrown in too! Both have a fantastic Attack value of 3 Silver, both have 2 Silver Dexterity, which should be enough to save them from a ring out, and then middling stats in Defence and Grapple. 8 Stamina, 4AP, and 5MP complete their cards, and of course a super duo like Relentless Dosh wouldn’t have anything but Popularity 1.

As with all wrestlers though, it’s what’s underneath the stats that counts! Let’s look at their skills.

We’ve got a healthy amount of special rules there! Crowd Please is always helpful, as is Bleeding. And that’s just Wonderkid! Nasty Goat has the real deal! Quitter is his Rope Ability, which does Knockdown AND Lifted. It only costs 3AP, meaning he has 1 spare to throw the wrestler too! He’ll FORCE his opponents to quit the band- err I mean ring. Sitting In The Tower is Nasty Goat’s Turnbuckle Ability. It doesn’t seem like much to start with – 3S ATT, 2 Damage, and Fury are only okay. But it also makes you roll a Crowd die (in addition to your Crowd Pleaser of course!). On a Boo result, the target wrestler can’t attack Nasty Goat during its next activation! Hit a high profile wrestler and then laugh when they can’t hit back!

Both wrestlers have a unique Passive Ability. Wonderkid’s Mind Bullets allow him to make Brawl attacks from up to 2 squares away, where as Nasty Goat’s is a penalty, meaning all his Brawl attacks have the Dirty special rule. Just keep using Quitter instead!

We need to mention their Crowd Pleasers too. They’re both the same, although Nasty Goat is a Heel. It gives every other friendly wrestler a +1AP counter! So not the wrestler that used it, but everyone else. That’s really great. In a team of 5 other wrestlers, that’s 5 extra AP in a turn, which equates to a whole extra wrestler! That’s very, very good.

Finally, let’s talk about their Tag Ability. It’s a Tribute To The Best Attack In The World! 4AP to do 3 Damage. Eh. Although it’s a 2G+1 ATT value, meaning a big chance of a Beatdown. It also has the Shove 8 special rule, which is the highest Shove in the game! Basically wherever you are you’re knocking your opponent into something. I recommend the ropes to attack them again, or the turnbuckle for that +1 Damage and Dazed. Used in the right situation, this can be a really big deal. It’s just best saved for when you really need it.

How does one fight against such splendour? Well, in the way you’d expect to fight against any wrestler worth 275K. Beat them up. Their Defence isn’t too high, and neither is their Grapple. They do a lot of damage, support their team, and move quite quickly, but they can’t take it! Corner one and put the boot in. Just watch out for the counter attack!

Lastly, who benefits from a team up with the greatest band in the world of RUMBLESLAM? Well obviously as Forest Soul wrestlers they’re good with the Timber Fists or the Cold Bloods. Particularly the Timber Fists, who really benefit from some extra movement, and have the Sprites to keep their Stamina topped up. However, their Crowd Pleasers really make them tremendous choices for any team. I’m not mincing my words here when I say that extra AP wins matches. If you’ve got a wrestler who has a great Turnbuckle Ability but not enough AP to do it in one turn, these are the wrestlers to turn to. Even on their own they’re great choices, as they provide a huge amount of support rules for only 275K. 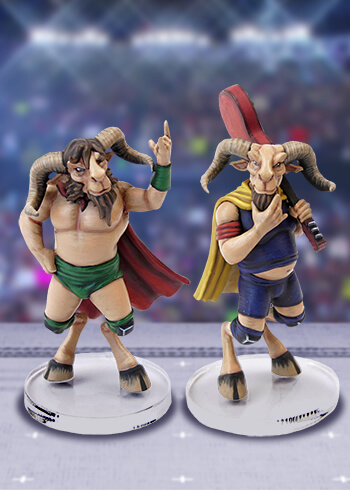 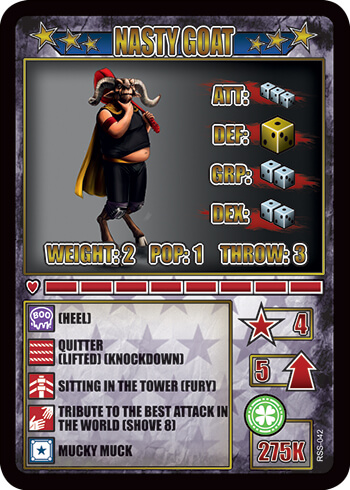